JUSTICE THROUGH LAW & WISDOM WITH HUMILITY

Born on 8 May 1928, R. K. W. Goonesekere was an eminent Sri Lankan legal scholar and lawyer. He is remembered by generations of his students as as an inspiring teacher and a distinguished lawyer.[read more=”Read more” less=”Read less”]

He was in the very first batch of students to graduate from the Department of Law of the University of Ceylon, Peradeniya. He graduated with honours and went on to obtain a BCL from Oxford, also with honours. He taught at the Faculty of Law, University of Ceylon from 1952 until 1966 and then went on to become the Principal of the Ceylon Law College, where he served from 1969 to 1974.
During the period of 1976 till 1982, Mr. Goonesekere was Associate Professor in Law at the Ahmado Bello University in Nigeria. On his return to Sri Lanka, he embarked on a career as an eminent practitioner of human rights and constitutional law. He appeared in leading human rights and constitutional law cases that took place at a time when the country was in political turmoil He also held the position of the President of the Sri Lanka Bar Association from 1992 to 1993. The last case he argued as a lawyer in the Supreme Court of Sri Lanka was the ‘Singarasa Case’(2006) on torture in detention, which involved the application of international law in the domestic legal system of Sri Lanka.
He also chaired a Committee to Advise on Laws Affecting Media Freedom and Freedom of Expression in 1996. The Committee issued a report, now referred to as the R.K.W. Goonesekere Committee Report on Media Freedom and Freedom of Expression. He was founder member and the Chairman of the Civil Rights Movement of Sri Lanka and a member of the Law Commission and the Legal Aid Commission of Sri Lanka. He was an expert member of the UN Sub-Commission on Protection of Human Rights from 1998 to 2001. Mr. Goonesekere was Chancellor of the University of Peradeniya from 2002-2007. During 2007-2014 he was Chairman of the Law and Society Trust. Mr R.K.W. Goonesekere’s contributions to legal education and scholarship, his exemplary ethical conduct as a legal professional, his commitment to public service and his use of erudite arguments for the development of the law in Sri Lanka will continue to guide generations of Sri Lankans in the years to come. [/read]

The Reception of International Law in The Domestic Law of Sri Lanka in The Context of The Global Experience
M. Sornarajah 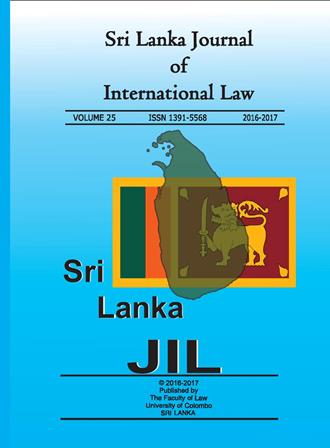 Safeguard Measures Under The WTO Regime: An Analysis of The Dispute Settlement Body’s Response to the Debate on ‘Unforeseen Developments’
Sandeepa Bhat B.

Implications of the Use of Drones Under International Law
Sahiba Maqbool

In Search Of The Dragon’s Soul: An Assessment of the Internal Morality of The Chinese Legal System
M.E. Wickremesinghe

Right to Information Act No 12 of 2016 (Sri Lanka)
T.R. Galappaththige

Pope Francis I on the Law and Lawyers
Claude Perera